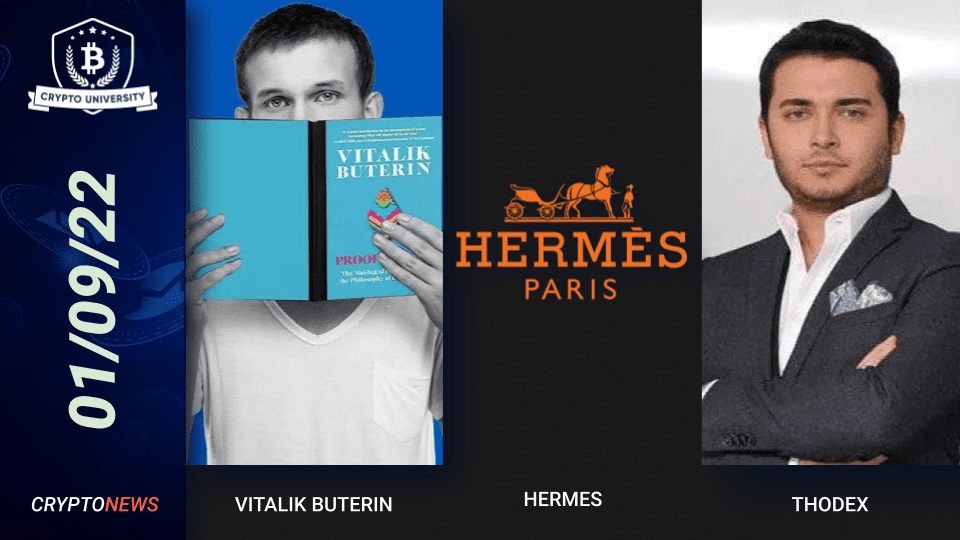 Vitalik Buterin, the co-founder of Ethereum, announced that he is releasing a book called “Proof of Stake” in a month. The book is a compilation of Buterin’s journals over 10 years. The book will be available in both physical and digital formats. The Ethereum co-founder will donate all proceeds to Gitcoin, a web3 development platform for coders.

“Proof of Stake, the (physical and digital) book compiling various writings I’ve made over the last ~10 years, will be out in a month! You can get a signed digital copy and NFT here: https://proofofstake.gitcoin.co. My share of the proceeds all goes to @gitcoin grants public goods!” posted Vitalik on his Twitter page.

The book will reveal the ideas behind Ethereum in the words of its founder, and describe the radical vision that Buterin had for developing more than a digital currency. Buterin wrote the Ethereum white paper less than ten years ago. Today, Ethereum’s market cap is valued in the hundreds of millions of dollars.

Hermès, a French luxury brand specializing in leather goods, filed a trademark for its name, claiming that it is seeking to expand into NFTs and virtual currency. The company will explore NFT trading, virtual goods marketplaces, clothing, footwear, and fashion shows.

The number of generic NFT trademarks has increased as more businesses continue to invest in the industry. According to a Finbold analysis, the number of NFT-related trademarks registered in the United States between January 1 and May 31, 2022, reached 4,049. During the reviewed period, 27 new NFT trademarks were filed on average every day.

Fatih Ozer, the creator of the Turkish cryptocurrency exchange Thodex, has been arrested in Albania. Ozer disappeared in 2021 with crypto funds belonging to around 400,000 customers. Following the arrest, the Interpol Department of the General Directorate of Security commenced extradition processes, according to a statement issued by Turkey’s Interior Ministry on August 30.

Ozer is faces accusations of fleeing with over $2.7 billion in customer cash in April 2021. Thodex was one of the country’s major crypto trading platforms at the time.

END_OF_DOCUMENT_TOKEN_TO_BE_REPLACED

END_OF_DOCUMENT_TOKEN_TO_BE_REPLACED
We use cookies on our website to give you the most relevant experience by remembering your preferences and repeat visits. By clicking “Accept”, you consent to the use of ALL the cookies.
Do not sell my personal information.
Cookie SettingsAccept
Manage consent