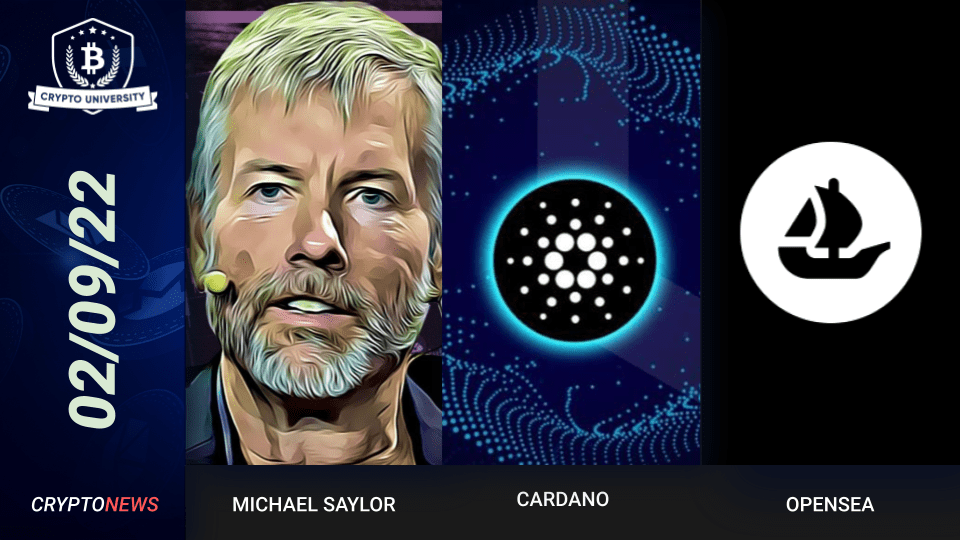 Michael Saylor, bitcoin maximalist and the co-founder of MicroStrategy, is getting sued by the District of Columbia’s attorney general for tax evasion. Allegedly, Saylor evaded income tax from the state of Washington worth $25 million.

The lawsuit alleges that the tech billionaire colluded with MicroStrategy by lying about his place of residence on his income statements. The attorney general office is seeking to recover more than $100 million in unpaid taxes and penalties.

MicroStrategy released a statement saying that the lawsuit was a personal tax matter which did not involve the company. The company said it was not responsible for overseeing its former CEOs’ tax responsibilities. “The District of Columbia claims against the company are false, and we will defend aggressively against this over-reach,” said MicroStrategy.

Robinhood Crypto, a popular investment app, announced that it will support Cardano (ADA) on its trading platform. This listing precedes the much-anticipated upgrade to the Cardano blockchain, Vasil Hard Fork. The Vasil Hard Fork will launch in September, though there are no specifics about the actual dates. The Vasil hard fork will improve Cardano’s scalability and make it easier for developers to build new dapps on the blockchain.

In April of this year, Robinhood also added Shiba Inu to its war chest of cryptocurrencies. It also enabled the support of Polygon, Solana, and Compound in that same month. Then in June, the commission-free trading platform added Chainlink. Cardano is the latest cryptocurrency added to the exchange.

Opensea, the leading NFT marketplace, announced that it will support NFTs on the upgraded proof of stake blockchain. The company further clarified that it would not support any forked NFTs – they will not reflect on their platform – as the platform will only support the upgraded system.

“First, and most importantly, we are committed to solely supporting NFTs on the upgraded Ethereum PoS chain. While we won’t speculate on potential forks–to the extent forked NFTs on ETHPoW exist–they won’t be supported or reflected on OpenSea,” announced the company on a Twitter thread.

END_OF_DOCUMENT_TOKEN_TO_BE_REPLACED

END_OF_DOCUMENT_TOKEN_TO_BE_REPLACED
We use cookies on our website to give you the most relevant experience by remembering your preferences and repeat visits. By clicking “Accept”, you consent to the use of ALL the cookies.
Do not sell my personal information.
Cookie SettingsAccept
Manage consent