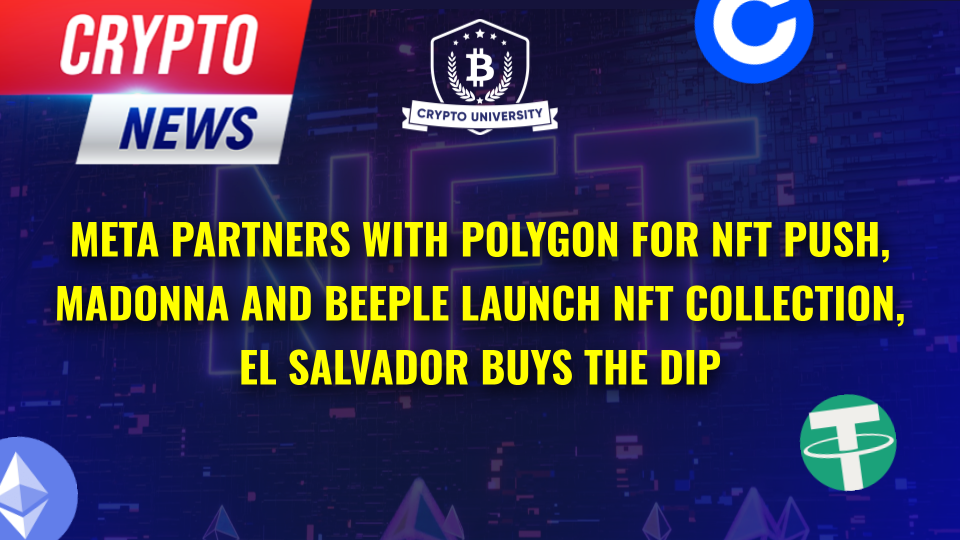 Ryann White, CEO of Polygon, announced on Twitter that 0xPolygon is partnering with Meta, Mark Zuckerburg’s metaverse project, to create an NFT platform for Facebook and Instagram.

Polygon, a layer two Ethereum scaling platform, was chosen by Meta because of its neutral carbon footprint, its ability to scale on Ethereum, and its ecosystem infrastructure.

The collection will be available for auction, on Wednesday 11th of May, at SuperRare NFT Marketplace. All proceeds will go to three charities that benefit women and children in need.

President of El Salvador, Nayib Bukele, announced on Twitter that El Salvador bought the bitcoin dip. The country topped up its bitcoin holdings with an additional 500 bitcoins purchased at an average price of $30700.

El Salvador now has 2,301 bitcoins, valued at $71.1 million at current prices. President Bukele started buying bitcoin in September 2021. The country adopted bitcoin and the US dollar as legal tender in the same month.

President Bukele also revealed the architectural plans for El Salvador’s Bitcoin City the same day. El Salvador plans to build a ‘Bitcoin City,’ powered by geothermal energy from a nearby volcano. The construction will begin in 2022, and the city will have no taxes except for value-added tax.

← Prev: Why does Elon Musk like Dogecoin? Next: How to get good at crypto? →

END_OF_DOCUMENT_TOKEN_TO_BE_REPLACED

END_OF_DOCUMENT_TOKEN_TO_BE_REPLACED
We use cookies on our website to give you the most relevant experience by remembering your preferences and repeat visits. By clicking “Accept”, you consent to the use of ALL the cookies.
Do not sell my personal information.
Cookie SettingsAccept
Manage consent