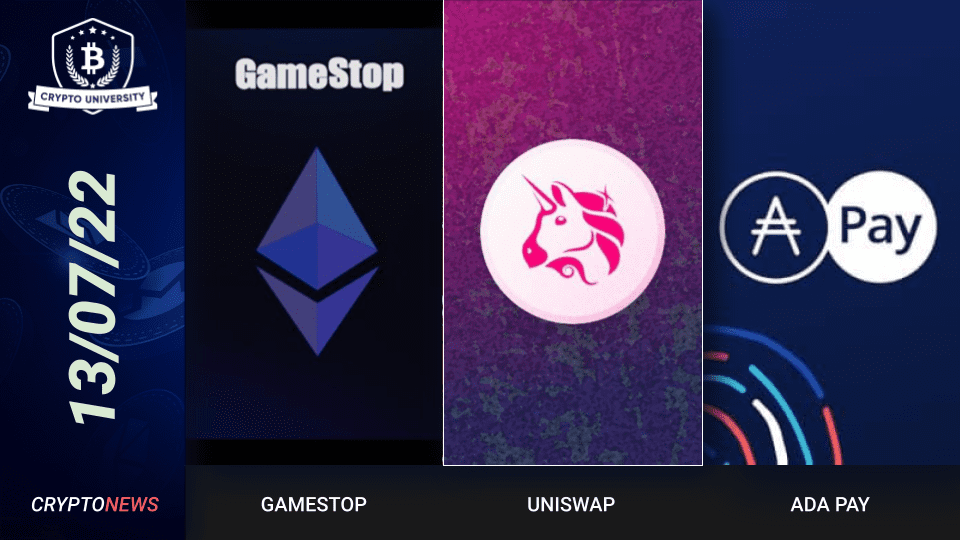 Gamestop, a gaming company, is launching an NFT Marketplace on the Ethereum blockchain. The marketplace is also a non-custodial and will allow users to buy, sell and trade NFTs on the blockchain. Over time, the marketplace plans to expand into other Web3 categories, including gaming.

Earlier this year, Gamestop launched a non-custodial blockchain wallet. The wallet allows users to store, send, and also receive currencies and NFTs. The Gamestop wallet is on the Ethereum blockchain and is a self-custody wallet – meaning users will have complete control of their assets.

Gamestop stocks are available on the NYSE, and also has its headquarters in Dallas, Texas. GameStop ($GME) shares are famous for the pump and dump attack orchestrated by Reddit users in January 2021.

Uniswap, an Ethereum-based DeFi platform, has fallen victim to a phishing attack. The phishing attack occurred on the Uniswap V3 liquidity pool. The hackers stole roughly 3,278 ETH worth about $3.5 million. The hacker sent 3,208 ETH to Tornado Cash, and only 70 ETH remains in the hacker’s account.

“A phishing attack that resulted in some liquidity pool NFTs being taken from individuals who approved malicious transactions. Separate from the protocol. A good reminder to also protect yourself from phishing and not click on malicious links,” said Hayden Adams, the founder of Uniswap.

The hacker was able to steal the funds by sending a malicious link pretending to do a free Uniswap airdrop. The hack occurred on Monday. Several users noticed the attack as well as the Binance threat intelligence department. “The attack looks like…a phishing attack. Both teams responded quickly. All good. Sorry for the alarm,” tweeted CZ, the founder, and CEO of Binance.

ADA Pay, a Cardano payment platform, has completed a plugin on Odoo, a business management software with over 7 million users. The ADA Payment system is built for businesses and allows merchants to accept an instant settlement on the Cardano Blockchain.

“Delivering this project can’t be more streamlined. The ADA Pay API just simplifies the development process. Not only is it well documented, but also the COTI team was prompt to give us support to all of our questions and concerns. I appreciate COTI’s professionalism and dedication,” said Rodolfo Miranda, the creator of the plugin.

← Prev: <strong>Playboy Partners With The Sandbox, Revolut Partners With Polkadot, OKX Sponsors Manchester City FC</strong> Next: What are DApps? →

END_OF_DOCUMENT_TOKEN_TO_BE_REPLACED

END_OF_DOCUMENT_TOKEN_TO_BE_REPLACED
We use cookies on our website to give you the most relevant experience by remembering your preferences and repeat visits. By clicking “Accept”, you consent to the use of ALL the cookies.
Do not sell my personal information.
Cookie SettingsAccept
Manage consent