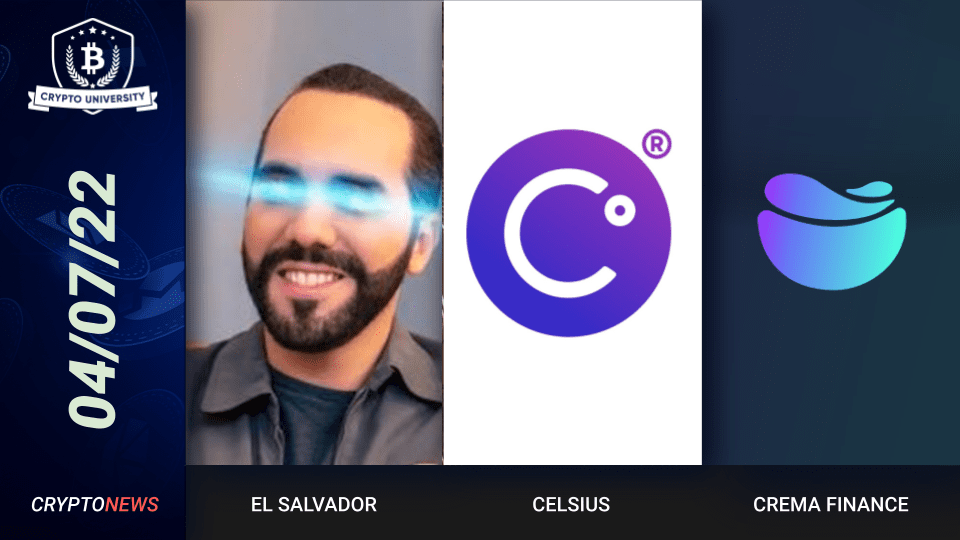 “El Salvador bought 80 BTC today at $19,000 each. Bitcoin is the future, thanks for selling cheap,” Bukele wrote in a tweet.

El Salvador started buying bitcoins in September 2021. The country adopted bitcoin as legal tender, along with the U.S. dollar. It also launched a bitcoin wallet calledChivo Wallet. Bukele has grand plans to build a bitcoin city. The city will use thermal energy from a nearby volcano to power bitcoin miners.

“I see that some people are worried or anxious about the price of bitcoin in the market, my advice: stop looking at the chart and enjoy life,” wrote Bukele in a previous Twitter post.

Celsius Lays Off 25% Of Staff

Celsius, a cryptocurrency lending platform, has reportedly laid off 150 employees, about 25% of its staff members. This comes after the company hired a restructuring law firm to help with its financial troubles. Celsius halted withdrawals and deposits last month, and the platform has not yet resumed its functions.

Due to the knock-on effects of the Terra Luna crash and the downward turn of the cryptocurrency market, Celsius is crippled financially. Celsius has proposed three plans moving forward. The first plan is to restructure the company and relaunch.

The second plan is to pool funds from big investors to resume operations. The third plan is to start a new brand that will hopefully recover investors’ funds.

“@CelsiusNetwork team is working non-stop. We’re focused on your concerns and thankful to have heard from many. To see you come together is a clear sign our community is the strongest in the world. This is a difficult moment; your patience and support mean the world to us,” wrote Alex Mashinsky, the CEO of Celsius, on the 15th of June.

Crema Finance, a Solana-based liquidity protocol, has suspended its services after experiencing an $8 million hack. The company offered $80,000 and a 72-hour grace period for the hacker to come forward.

“The hacker’s fund movements are getting clearer. We’re connecting with all relevant organizations to get more clues. We’ll keep you all updated,” tweeted the company.

END_OF_DOCUMENT_TOKEN_TO_BE_REPLACED

END_OF_DOCUMENT_TOKEN_TO_BE_REPLACED
We use cookies on our website to give you the most relevant experience by remembering your preferences and repeat visits. By clicking “Accept”, you consent to the use of ALL the cookies.
Do not sell my personal information.
Cookie SettingsAccept
Manage consent