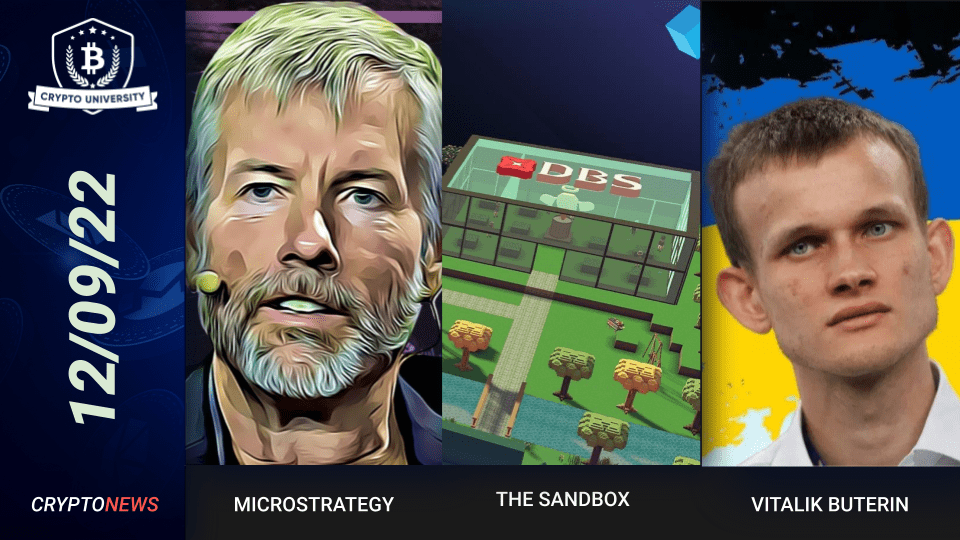 MicroStrategy, a software development company, founded by Michael Saylor, wants to buy more bitcoins, according to their most recent SEC filing. Last Friday, the company filed a proposal to sell $500 million of its stock to purchase more bitcoins. The company has been buying bitcoin since 2020 and is the largest institutional owner of the digital asset.

This move comes after Michael Saylor stepped down as CEO of the company to become an executive chairman of the company and focus on advancing MicroStrategy’s bitcoin holding position. Under Saylor’s leadership, MicroStrategy has accumulated more than 130,000 bitcoins, worth over $2 billion.

The cryptocurrency down-market has not meant smooth sailing for the company, as its stock value is correlated to the volatility of the bitcoin market. In addition, Saylor is accused of tax evasion by the IRS.

DBS Bank Partners With The Sandbox

DBS bank, a Singaporean banking giant, announced a partnership with The Sandbox, a metaverse platform. The bank will purchase a plot of land in the metaverse and seek to create immersive experiences for its customers. DBS bank is the first Singaporean financial institution to venture into the metaverse.

“Over the last decade, the biggest changes in the world of finance have been catalyzed by digital advancements. Our partnership with The Sandbox and Animoca Brands marks the start of an exciting collaboration as we push the boundaries of what is possible in the metaverse, said Piyush Gupta, the CEO of DBS.

Gupta added that in the coming decade, shifts driven by new technologies, such as artificial intelligence and blockchain, have the potential to have a profound impact on the industry. He believes that metaverse technology, while still evolving, could also fundamentally change the way banks interact with customers and communities.

Vitalik Buterin, the co-founder of Ethereum, visited the Kyiv Tech Summit in Ukraine. His visit was to show support for the country amid its war with Russia. Buterin’s visit was kept a secret for security reasons, and the audience was pleasantly surprised by his appearance. It was Buterin’s first visit to Ukraine.

“@VitalikButerin makes his first ever visit to Ukraine during the Kyiv Tech Summit. KTS brought together 500+ hackers with around 50 project submissions to help Ukraine,” tweeted Kyiv Tech Summit.

END_OF_DOCUMENT_TOKEN_TO_BE_REPLACED

END_OF_DOCUMENT_TOKEN_TO_BE_REPLACED
We use cookies on our website to give you the most relevant experience by remembering your preferences and repeat visits. By clicking “Accept”, you consent to the use of ALL the cookies.
Do not sell my personal information.
Cookie SettingsAccept
Manage consent