Michael Saylor “Bitcoin is a network that stores digital energy”, NFT market is close to become a $13 Billion industry, Bitcoin continues to fall and the market loses $200 billion 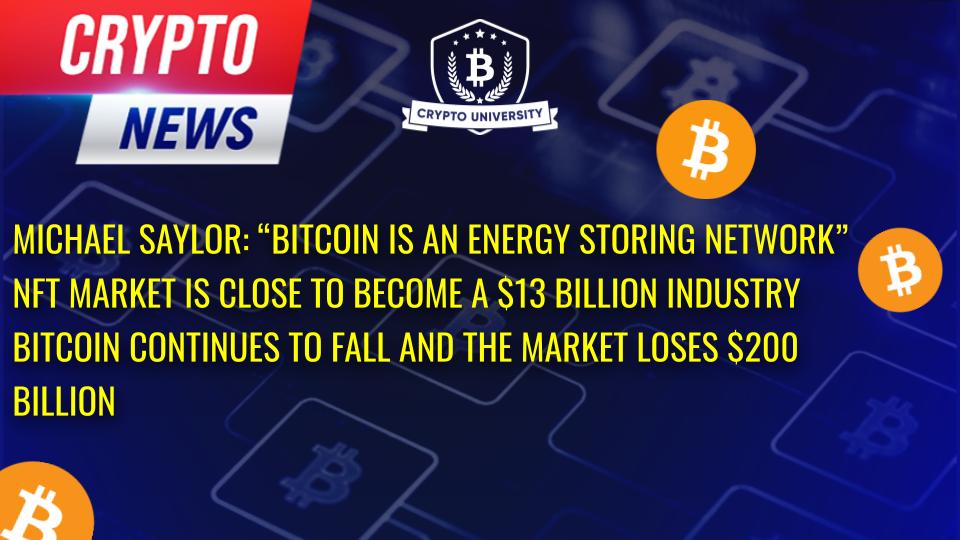 Michael Saylor “Bitcoin is a network that stores digital energy”

Michael Saylor (MicroStrategy CEO) kicked off the ninth edition of the MIT Bitcoin Expo event this Saturday, and highlighted the importance of Bitcoin to digital energy.

In a conversation with Chris Keshian (Director of Digital Assets at NeoFlow Asset Management), Saylor explained that despite all the digital information in recent decades, not all data that is transmitted can be considered energy.

However, the Bitcoin transaction system allows large investments to be made through private keys.

NFT market is close to become a $13 Billion industry

The NFT market projects a promising future for the coming years with the impulse of influencers, gaming communities and digital art trends.

Research firm MarketsandMarkets predicts that the current volume of $3 billion will reach $13 billion by the end of 2027.

The pillars on which the growth of NFTs stands will continue to be reinforced by entire communities, of which more participants are joining the digital art trade.

The analysis also includes other influential factors, such as fashion, retail and Blockchain adoption.Considering that the NFT market is in its early stages, it is safe to think that much remains to be seen.

Bitcoin continues to fall and the market loses $200 billion

The cryptocurrency market has been in a short-term downtrend, leading Bitcoin to test the $34,000 support level. This setback has cost the market $200 billion, marking a sell-off season.

Although the bulls control the zone, further corrections towards the $30,000 level, one of the strongest supports for the Bitcoin price, are expected.

The latest movements in the crypto market show the need for an accumulation zone to expect large purchases and change the market sentiment.

← Prev: How did Luna get so many Bitcoins?, How would a US recession affect Bitcoin’s price?, MIT specialist:<em> “The world needs Bitcoin”</em> Next: TerraUSD Briefly Loses $1 Peg, Instagram To Support Ethereum, Solana And Polygon NFTs, Bentley University Accepts Crypto For Tuitions →

END_OF_DOCUMENT_TOKEN_TO_BE_REPLACED

END_OF_DOCUMENT_TOKEN_TO_BE_REPLACED
We use cookies on our website to give you the most relevant experience by remembering your preferences and repeat visits. By clicking “Accept”, you consent to the use of ALL the cookies.
Do not sell my personal information.
Cookie SettingsAccept
Manage consent