“No tangible value”, “No Use Case”, “Driver of speculation”, “Made for criminals”… just a couple of the many negative common sayings towards Bitcoin; some are not an issue of the technology itself but rather a fault in human nature and society. The others stem from a lack of understanding. Let’s have a deeper dive into the technology and speak about the sides that are mostly overlooked.

To do this, we are going to have to go through a mindset change. Just for a few minutes, trust me on this. Just forget about the current price of Bitcoin, what the price was last week, what the price will be in a year and whether you lost some hard-earned money trying to trade a rather complicated market.

Now that we have stripped one side down, the trading side. What is Bitcoin, an asset? A commodity (just like gold)? Or even a digital gold? Although Bitcoin usually falls into the aforementioned categories, I believe there is no asset class that actually encompasses the value and versatility of Bitcoin as an asset. First of all, it can act as a store of value and a hedge against inflation. This being its initial purpose based on its creator Satoshi Nakomoto.I believe he himself did not predict the effect that it would have on the technological space; the programming language that he used “blockchain” has led to the creation of several projects and solved several problems around the world. Blockchain is mothered by the Bitcoin code; therefore, Bitcoin will technically always be the gateway into the blockchain space no matter what institutions/ day traders/ speculators have to say about it.

One of the main features of the blockchain programming language is its transparency through its public ledger. Every transaction made on the blockchain is irreversible and available for all eyes to see. Therefore, Bitcoin on its own does not encourage money laundering, it is objectively against it based on its bare code. However, this talk we will have another day.

Now that we have grasped the feature of transparency and have removed emotional attachments and biases based on the price of Bitcoin, we can focus on the potential of this “transparency” feature through exploring cases where it has been used, in this specific example: Bitcoin for charity projects.

What is charity? Is it beneficial to the progression of communities, countries and the human race? Some may argue against it, but the concept of charity in itself is not inherently problematic. The main issue being that most donated money does not actually go to the intended beneficiary. This is due to bureaucracy, marketing costs and sometimes corruption. The New York state for example, estimated that about 30-40% of donations stayed with the organisers.

How does blockchain change this? First of all, it eliminates the need for a middleman or an authority that can provide trust through:

The need for the above is reduced when donations are given through the blockchain network as there will be no meddling of funds that are openly available to audit for all on the blockchain.

A good example of where charitable donations going through blockchain is effective is the Paxful Built with Bitcoin project and Binance’s charity projects.

The Binance charity project raised a respectable amount of $113 Million with a total of 937 thousand beneficiaries. Binance’s wallets are all publicly available to track and audit for all. More information on their projects including the active projects can be found here.

The Binance charity project shows the scale of transparency and accountability we should be aiming to achieve in all areas.  All transactions to the Binance charity wallet can be viewed and the amount spent is also showing below.

Another special project is Paxful’s “Built with Bitcoin” initiative. Ray Youssef, born in Egypt but raised in New York, has not forgotten his roots in Africa and has dedicated a considerable amount of his time at Paxful to lead this initiative. 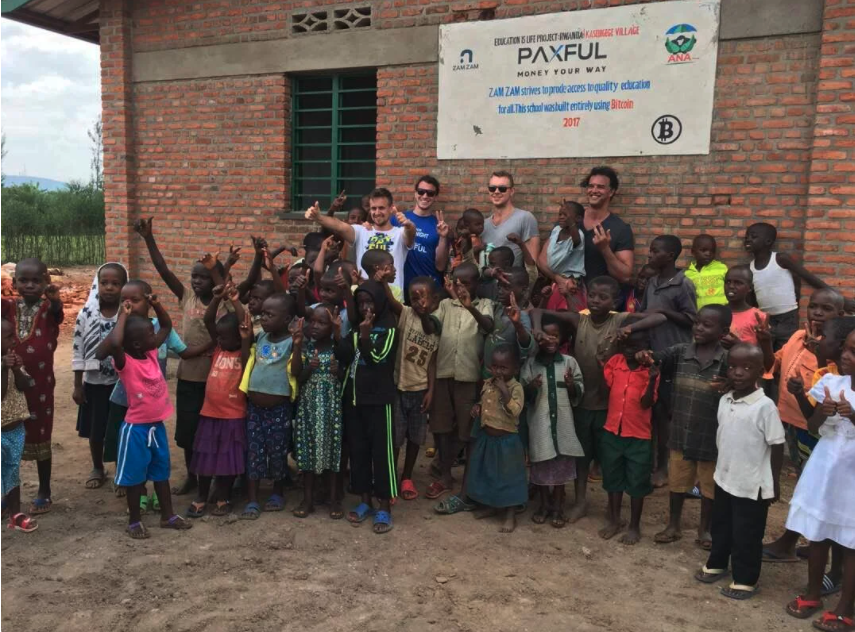 He believes there is power through education, especially in a developing continent such as Africa and he has dedicated his work at Paxful towards this project. When #BuiltwithBitcoin started, the Paxful team only had 30 people and now amassing to more than 400. The project grows and lives with Paxful.

The first school was built in Rwanda, in 2017. The price of Bitcoin was $15,000 at the time, now we are sitting around  $45,000 (at the time of writing). This is where we track back to the beginning of the article, the Bitcoin price does not matter, Bitcoin does. You just have to ask yourself how many Bitcoins you have, not what the bitcoins are worth. The discussion is no longer about whether it is going to fail, one can argue that Bitcoin  has become too big to fail. It is the core of the blockchain ecosystem, an ecosystem that has become on its own, a financial system too. It is not about speculation, it is about a new age of finance, where exchange CEOs such as Ray Youssef of Paxful are devoting as much time into their company as they do to the world. It is about impact, I don’t know how many sane minded people can see and know about the change this ecosystem is bringing, and try to stop it?

Bitcoin is helping banked the unbanked, and giving those without a chance, a chance.

You begin to ask yourself, if anyone is against the above…what are they for?

Any advice or information in this publication is general advice only – it does not take into account your personal circumstances. Please do not trade or invest based solely on this information. By viewing any material or using the information within this publication you understand that this is general education material and you can not hold any person or entity responsible for loss or damages resulting from the content or general advice provided here. Trading cryptocurrency has potential rewards, but also potential risks. You must be aware of the risks and be willing to accept them in order to invest in the markets. Only trade with funds you can afford to lose. This publication is neither a solicitation nor an offer to buy/sell cryptocurrency or other financial assets. No representation is being made that any account will or is likely to achieve profits or losses similar to those discussed in any material on this website. The past performance of any trading system or methodology is not necessarily indicative of future results.

← Prev: What is the Lightning Network? Next: Altcoin Analysis August 17th 2021 →

Where to earn a cryptocurrency degree online in 2023

The increased acceptance of Bitcoin and other cryptocurrencies across the world has fueled a strong desire to learn crypto and...

END_OF_DOCUMENT_TOKEN_TO_BE_REPLACED

How to trade crypto in 2023 – A cryptocurrency trading training

Due to the introduction of blockchain technology and the growing acceptance of digital assets by the general public, the...

END_OF_DOCUMENT_TOKEN_TO_BE_REPLACED

Although it involves some risk, trading cryptocurrencies may be a very significant way to make money daily. With the use of...

END_OF_DOCUMENT_TOKEN_TO_BE_REPLACED
We use cookies on our website to give you the most relevant experience by remembering your preferences and repeat visits. By clicking “Accept”, you consent to the use of ALL the cookies.
Do not sell my personal information.
Cookie SettingsAccept
Manage consent